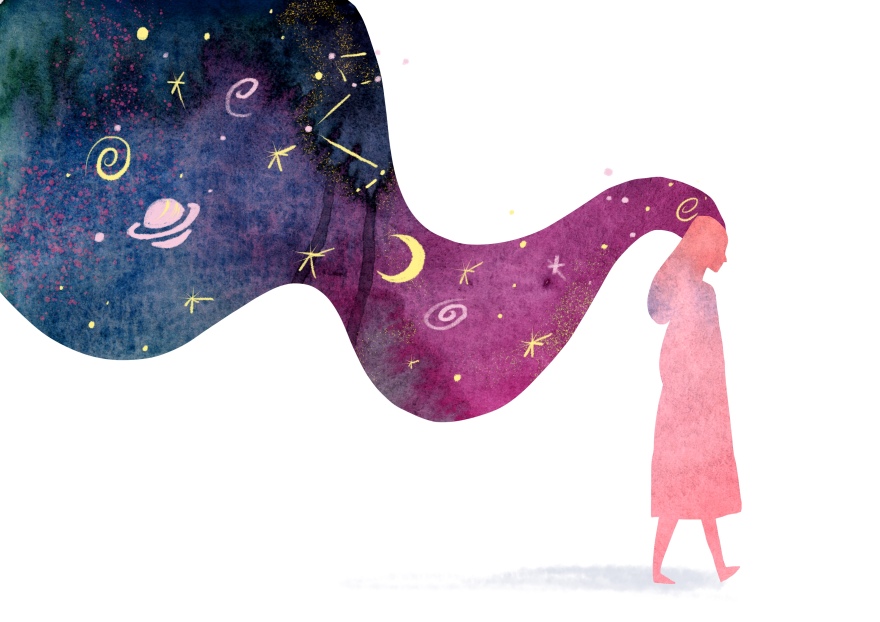 I’ve already spoken here about my rediscovery of inlay and how much I love it, but I haven’t stopped at just physically making it with paper and scalpel! I got an iPad a couple of months ago, and I’ve been using scanned in watercolour textures since I got it. (It’s true that I have always done this with digital work as a way of giving it traditional textures) Procreate has fulfilled my main reason for getting an iPad; I can make a finished piece of artwork with just one portable piece of kit! I’ve even recently done an entire commission from the iPad, which made the whole process a much more relaxing process, especially as the project had a short deadline. 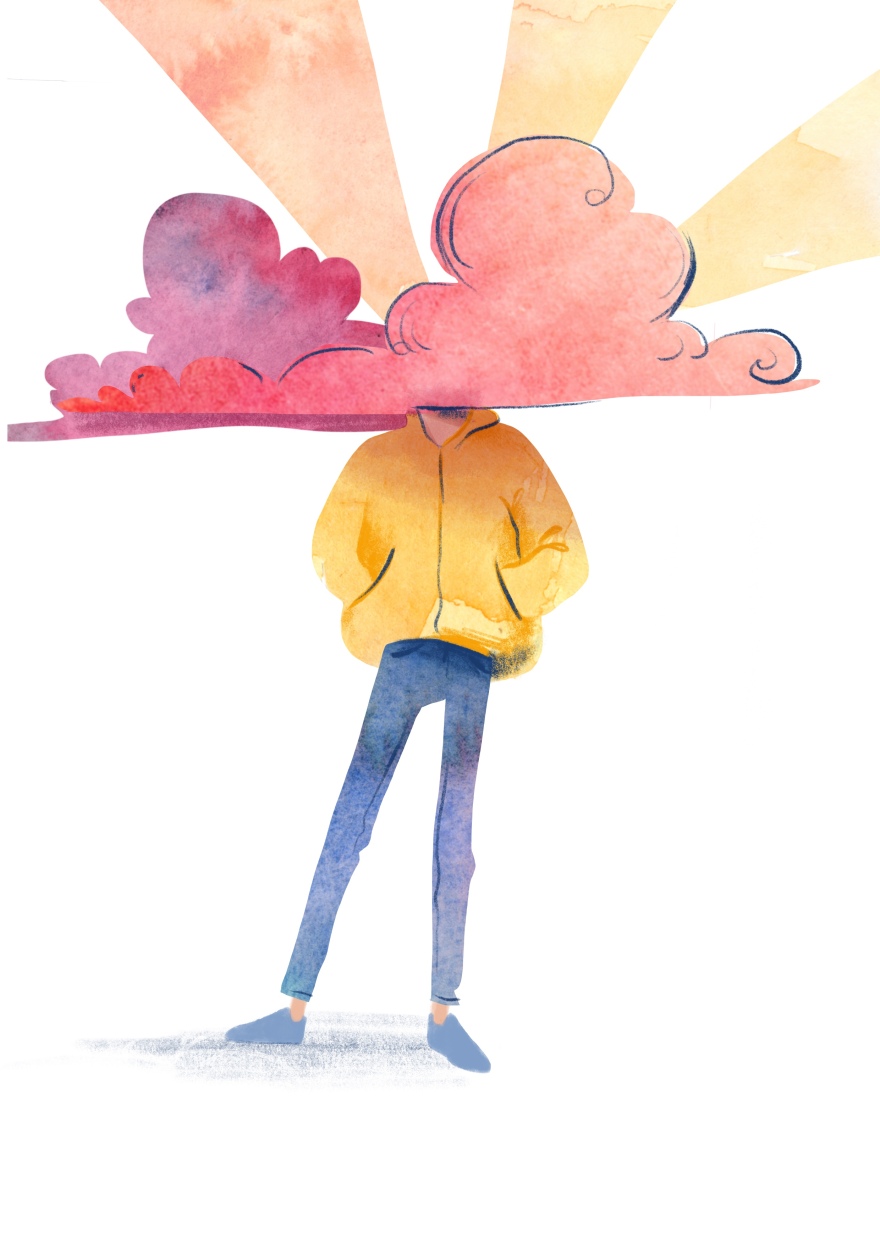 Working digitally also means exploring more abstract concepts for me; it frees me from worries about ‘good enough’ ideas, which is so wonderful! I don’t believe I would ever have produced the artworks in this blog post by had (or indeed with my Wacom). 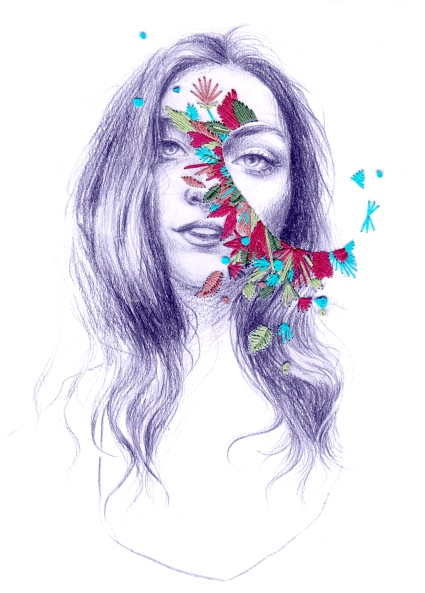 I really truly can’t keep a really consistent style up for more than a few months. I just feel like there are so many things to try, why would I want to only do one thing forever??

I’d love to get an agent, but they want work which is more pinned down; I’m just not ready for that! I want to keep exploring my style and trying new things. But actually, then I look at the work of Deanna Staffo and John Hendrix and I think, perhaps it’s ok to keep playing.

These portraits were made on a sudden whim to retry some techniques I learned during my A level textile art course. I absolutely adored textile art, as it was basically using different media to express the same things I was expressing in my Art A level, without feeling constrained by painting techniques and portraits (I guess I kind of played it more safe in art). My first big final piece in textile art was a series of embroidered photographs. They were not good!! But I so enjoyed doing them. I find hand embroidery puts me almost into a trance, I can just do it for hours, and having to work slowly forces you to consider every mark you make. And french knots are just so fun to make.

The other technique I’ve brought back is paper inlay. Honestly when we learned it it blew my mind, it’s so simple but I think it looks SO much nicer than simply collaging paper, and it’s less likely to get rough around the edges. It’s so different to just putting paint to paper, too; I can be a lot more experimental with the paint, which results in more interesting colours and textures, and the edges are so CRISP!! I really love having it back in my practise.

Of course, the most unifying feature of these illustrations are the portraits. Portraits are my first and greatest love in art; I could never, never get tired of them. Every person’s face is different, and every face can express so many different emotions. They’re purple because I just really adore the softer colour compared to black/grey. I started using purple in my watercolours because graphite doesn’t scan very well, plus the colours I use are really vibrant so the grey stood out like a sore thumb. I think the purple makes the images look warmer, plus I like the softer texture of the leads.

Making these portraits were so meditative to me. I didn’t plan ahead, I just found a photo I liked, and as I drew I thought about what would compliment the portrait. I think pieces like this would work really well for magazine editorials, too! 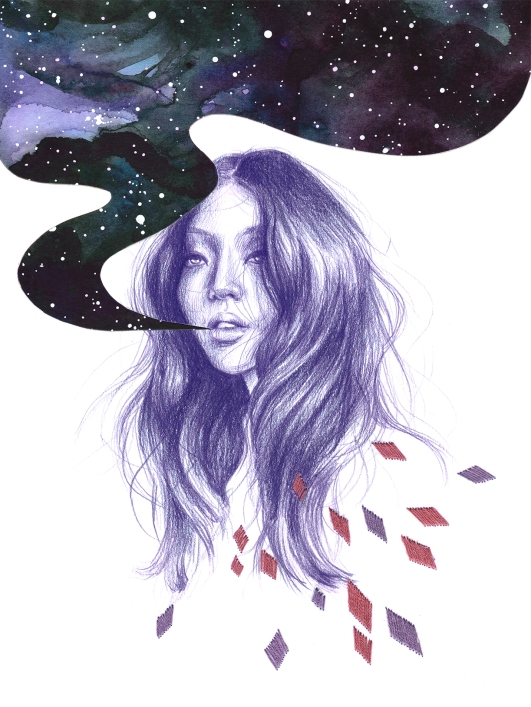 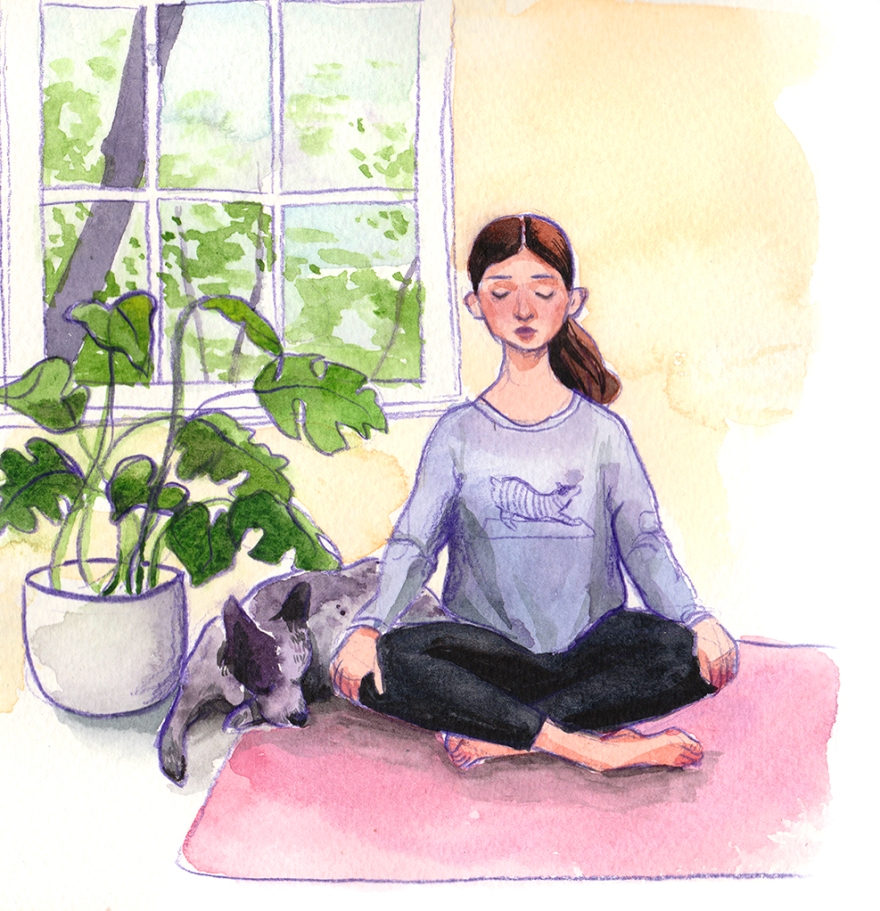 This is of Youtube yoga teacher Adriene! I’ve been practising along with her videos for years now (and you can too if you click here!)

Yoga is a valuable part of my life; after a long day hunching over my desk (I sit in some seriously awkward positions) I love having something that gets me moving, increases my strength and gives me a wonderful stretch out!

The image above is of my good friend Emmy. We went on a trip to Shoreditch in London when it was FREEZING cold near the start of this year. I really love to work from photos I’ve taken, I think the memories associated with the photograph come through in the painting (or perhaps that’s just me!)

The illustration below is from the same trip, of the Gherkin taken on a misty morning. 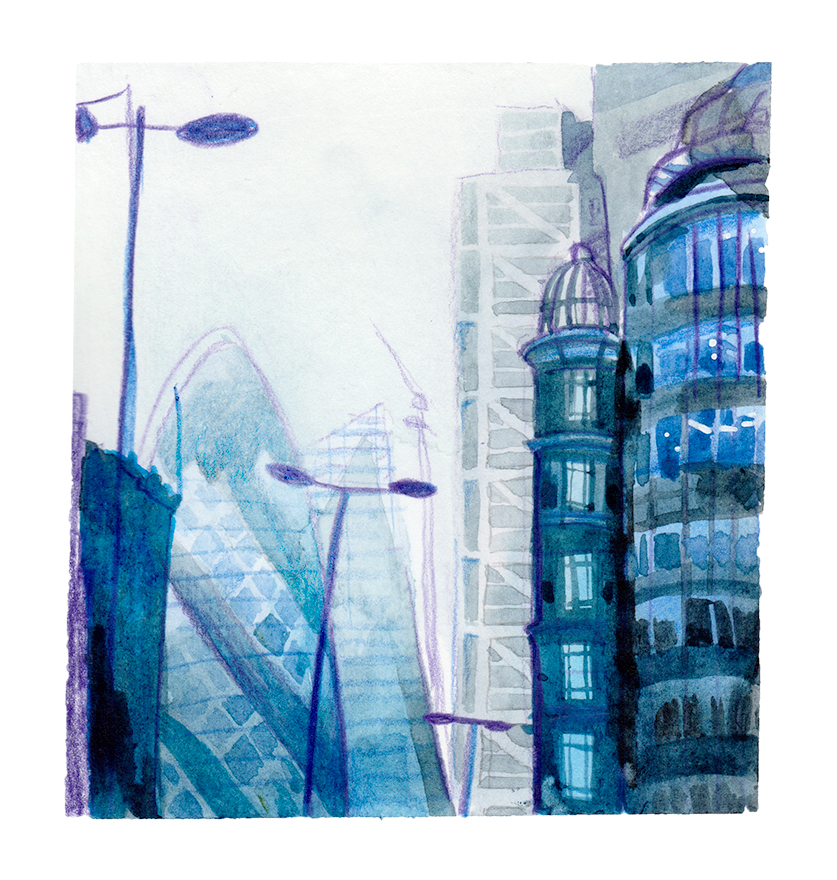 I painted this for my mum all the way back in August! I recently touched it up so I thought I’d finally scan it in to show you.

Tragically for me, I’ve never been to Florence, but I so enjoyed painting it! I’ll look forward to getting there one day.

Have you been to Florence?

Do you love the colours in this?! I love how vibrant they are! This painting combines three of my favourite things: portraiture, colour and coffee. 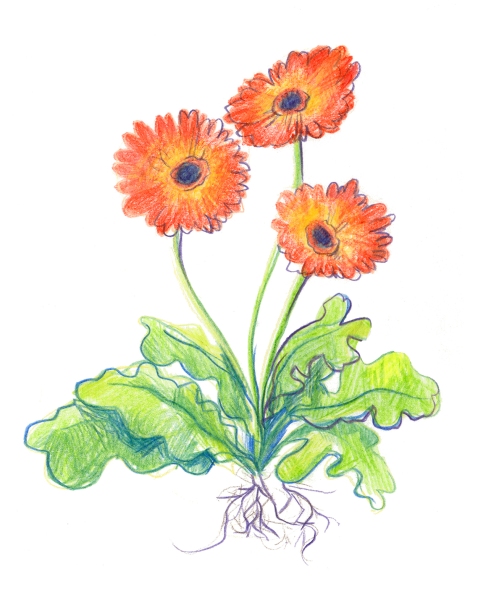 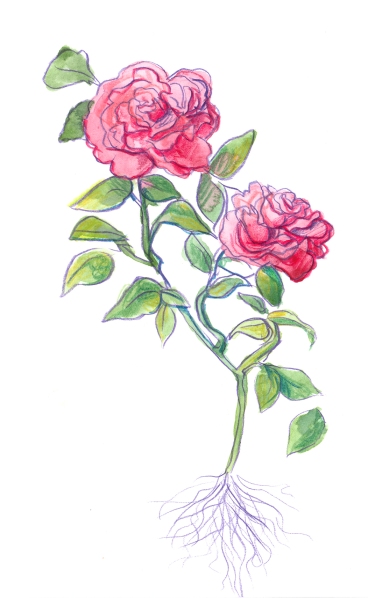 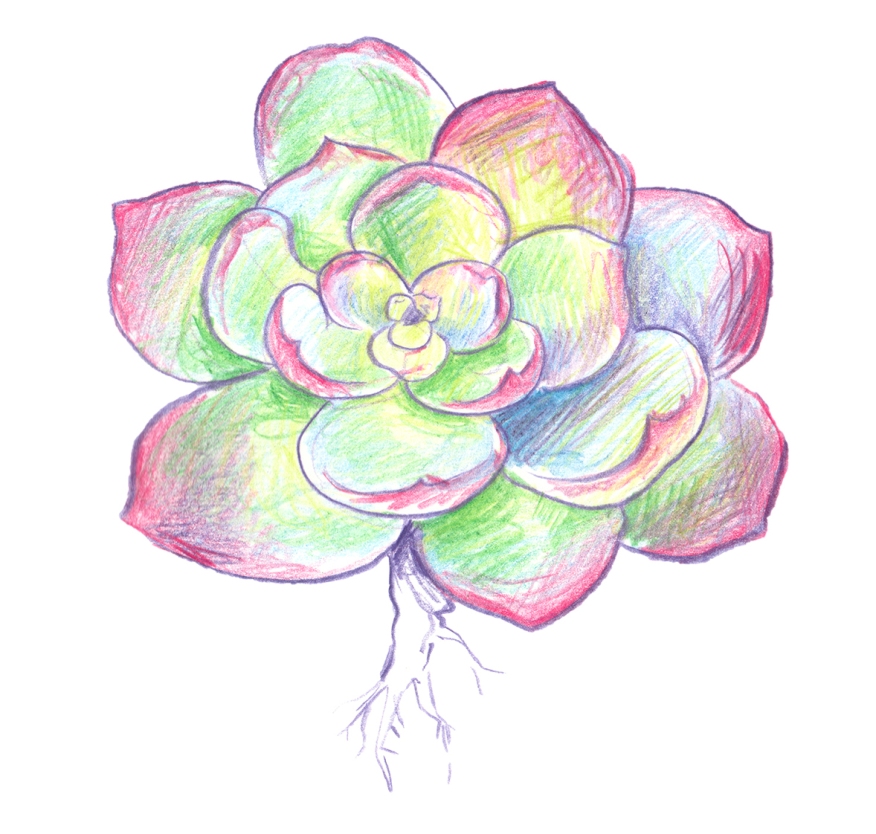 Laxmi was fifteen when she was attacked with acid on the way to a music lesson. She had rejected a marriage proposal, and the 32 year old man stalked her and attacked her for this decision. This is a similar story to many other victims of acid attacks in India, where acid was readily available and cheaper than milk.

But Laxmi doesn’t want you to call her a victim. Laxmi is an individual, who knows that her worth is not just skin deep.

“Today I love my face because I realized your face is not the only important thing. I didn’t give importance to my face. I gave importance to my work.”
In 2013, Laxmi brought a petition with 27,000 signatures to the Supreme Court, protesting how readily available acid was. This led to legislation which restricted the sale of acid, as well as providing help and compensation to survivors. She received the International Woman of Courage Award from Michelle Obama, delivered a Ted Talk, and is now a TV host. This is all in addition to her campaigning for Stop Acid Attacks.

Acid attacks are often rooted in sexism, with 80% of victims being female, often attacked, like Laxmi, by rejected suitors or abusive fathers or partners.
Today, Laxmi is raising a daughter with her partner and fellow activist Alok Dixit. They decided not to marry, which I think is pretty cool, when the fixation with marriage is what resulted in her attack in the first place!
There is so much that could be said about the rising number of acid attacks, not only in India but across the globe. I could comment on the sexist nature of it, the desire to make a woman undesirable, but it’s such a complicated subject and one I can’t pretend to be an expert in. The most amazing thing is the ways in which many women choose to fight against the stigma and push for improvement in legislation. I am inspired by Laxmi’s courage to campaign for change, legally and socially, and her determination to be happy no matter what judgement she faces.
I recommend this article from the BBC and this CNN article, which also has a short video.
Unfortunately I can’t find a translation or subtitles for her Ted Talk – if anyone does, please let me know, I would love to know what she says in it!
Posted on 17/04/2018 Posted in Portraits, SketchbookTagged coloured pencil, editorial, feminism, illustration, illustrator, pencil, PortraitsLeave a comment 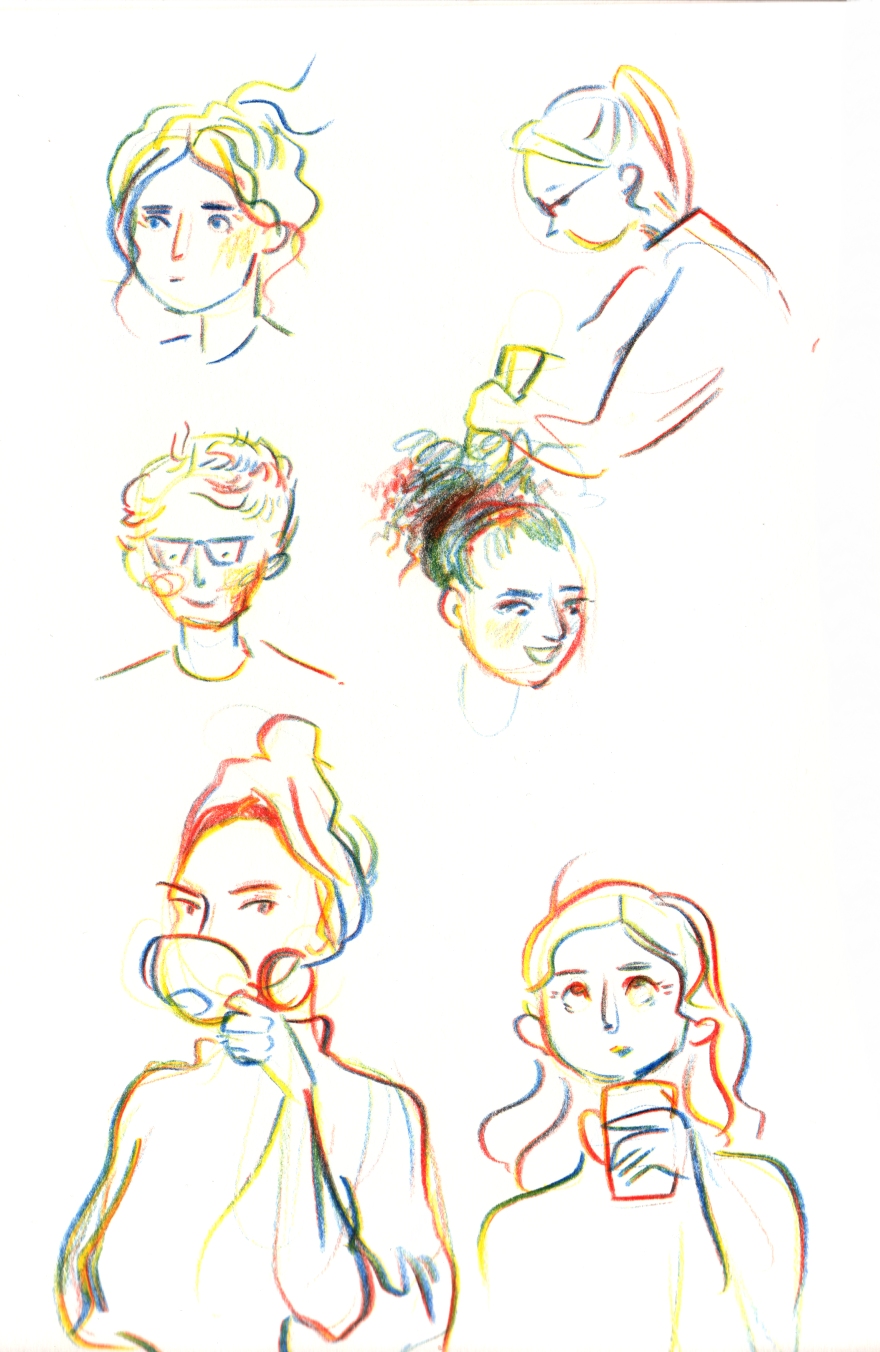 I’ve been a lot slower with work recently. I finally got my routine perfected when… well, life happened a bit! I’ve been pretty busy with family stuff and a couple of great new design jobs, and my personal work has taken a bit of a back seat! But the other day I got the ball rolling again by having a little sketching session in the evening, watching TV and mostly drawing what I saw. So, some of these faces you may recognise from Celebrity Bake Off, while the people with coffee and books are thoughts for an upcoming project. I hope you like them! There will be another set up here soon. 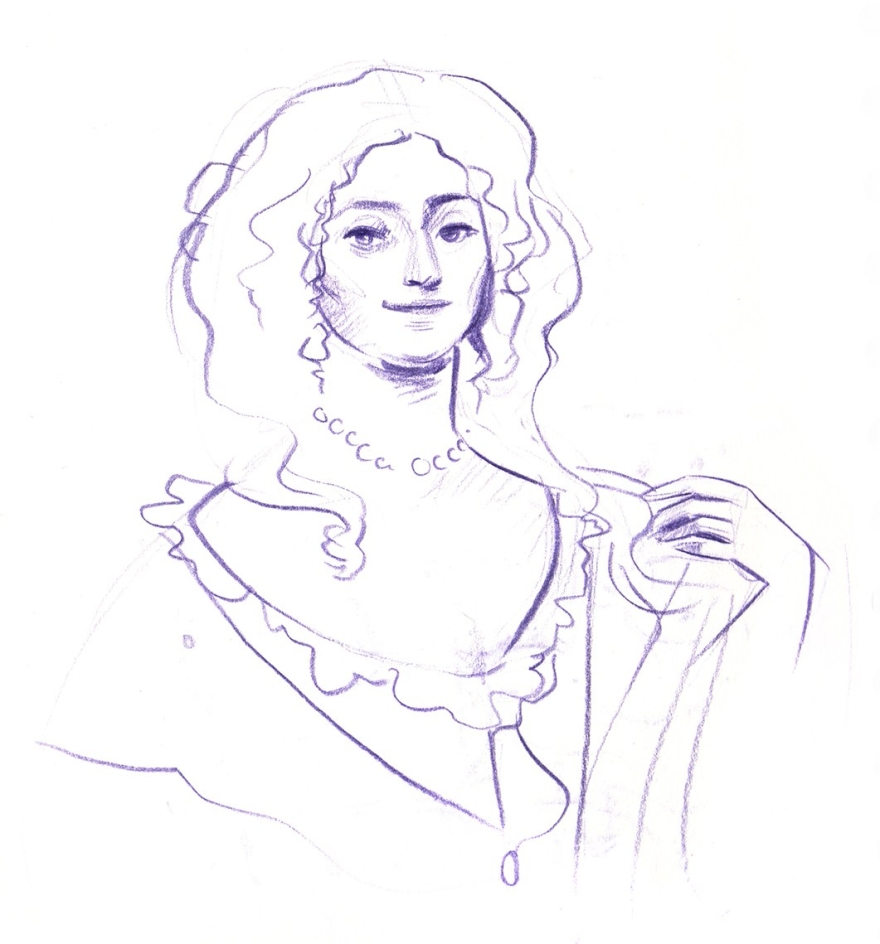 I went to London last week. It’s only about an hour away on the train from Leicester which is such a treat! London always feels buzzy, like something important is happening and people are achieving big things. This is layered with a thousand years of history all around you, knowing how much has happened there in the past too makes it really exciting for me! It’s an atmosphere I absolutely love soaking up.

This is without mentioning the museums!! The National Gallery is my favourite, of course, as it inspired my deep love of the Netherlandish Primitive style, and houses so many famous paintings that you see often in art history books.

Speaking of museums, the second image is a sketch I did in the National Portrait Gallery based on a painting of The Family of Sir Robert Vyner. I wanted to live in this painting when I was little! I think that the people look so real, it almost feels as though if you look closely enough at the painting you could get to know them. Apart from their clothing, can’t you picture walking past them in the street?

I finished up by sitting in the Waterstones across from the Gallery, reading and sketching the outside. This didn’t take long but I really like it!!